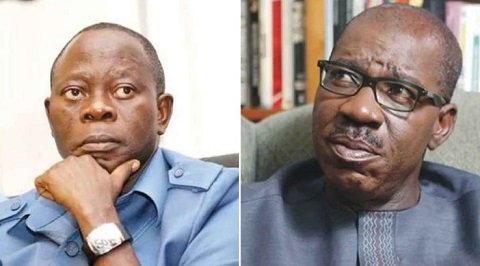 A Federal High Court sitting in Abuja has restrained the Edo State Government and Governor Godwin Obaseki from arresting and prosecuting the Chairman of the All Progressives Congress (APC), Mr Adams Oshiomhole.

Earlier, a panel of inquiry headed by Justice J.U Oyomire, had indicted Oshiomhole and recommended that criminal proceedings be commenced against him.

Oshiomhole, through his counsel, Mr Ehiogie West- Idahosa, in an ex parte motion asked the court to stop his arrest and prosecution on account of the report.

The Edo government, however through its counsel Mr Alex Ejeiseme, SAN, went to the court with a preliminary objection to stop the ex parte order from being heard.

Ejeiseme argued that since he was challenging the jurisdiction of the court to hear the matter, the court must determine the issue of jurisdiction before entertaining any other application.

He agreed that he had not been served the applicant’s processes, but that he responded based on an online version he had printed.

Following listening to arguments by parties, Justice Ahmed Mohammed ordered respondents in the matter not to take any decision on the matter pending the determination of the issue of jurisdiction.

”An interim order is hereby made restraining the prosecution of the applicant pursuant to the report submitted to the 1st to 3rd respondents or any white paper, pending the determination of the issue of jurisdiction raised in the 1st to 4th respondents’ notice of preliminary objection, the judge said.

The court also directed Oshiomhole’s counsel to serve all the respondents his processes within 48 hours.

Also named as respondents in the suit are the Attorney- General and Commissioner of Justice for Edo, Justice J.U Oyomire, Inspector-General of Police and the Department.

The matter is, however, adjourned until June 17.