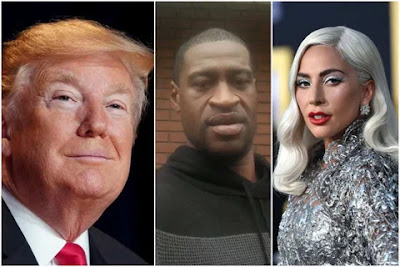 Lady Gaga has called Donald Trump “a fool and a racist” and argued he has offered “nothing but ignorance and prejudice while black lives continue to be taken”.

In an emotional message posted to social media, Gaga expressed her anger over the killing of George Floyd, a Minneapolis man who was pinned to the ground by his neck by a white police officer despite pleading for his life.

“I am as outraged by the death of George Floyd as I have been by the deaths of exponentially too many black lives over hundreds of years that have been taken from us in this country as a result of systemic racism and the corrupt systems that support it,” she wrote.

She continued: “The voices of the black community have been silenced for too long and that silence has proven deadly time and time again. And no matter what they do to protest, they are still met with no compassion by the leaders that are meant to protect them. Everyday people in America are racist, that’s a fact.”

Turning her attention to “racist” Trump, Gaga said he had offered nothing but “ignorance and prejudice while black lives continue to be taken”. She added: “He is fuelling a system that is already rooted in racism, and racist activity, and we can all see what is happening. It’s time for a change.”

“We MUST show our love for the black community,” she continued. “As a white, privileged woman, I take an oath to stand by that. We haven’t, as a privileged community, done enough to fight racism and stand up for those people who are being killed by it. This isn’t justice. This is an epic tragedy that defines our country and has for a long time. I am sad. I am angry. And I will use the words that I can find to try to communicate what needs to change in as an effective and non-violent way as possible for me.”
Post Views: 6