The Police Public Relations Officer in the State, SP. Isah Gambo in a press statement issued on Sunday said the joint security team stormed Kadoji village in Jibiya and destroyed the camp of one notorious bandit identified as Bala Wuta.

Camps belonging to bandits in Danmusa, Dutsima and Jibiya Local Government Areas of Katsina State have been destroyed with rustled animals recovered. 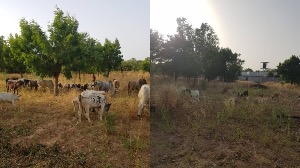 This comes following a sting operation on Sunday conducted by the Katsina Joint Security Forces.

The Police Public Relations Officer in the State, SP. Isah Gambo in a press statement issued on Sunday said the joint security team stormed Kadoji village in Jibiya and destroyed the camp of one notorious bandit identified as Bala Wuta.

SP. Gambo in the statement said: “Based on credible intelligence, a combine teams of Nigerian Police Force, Nigerian Army and vigilante group carried out sting operations in KADOJI village, Jibia, camp of a notorious bandit, one Bala Wuta.

Consequently, after a fierce gun duel, the bandits were dislodged by the galant security forces after succeeding in destroying theircamp.”

In a related development, the Dutsima Area Commander and his team, also stormed MEGEZOJI, a bandits’ camp at Yantumaki forest and successfully dislodged the hoodlums hibernating there.

In the course of the operation, SP. Gambo said scores of rustled animals were recovered. The hoodlums are said to be currently on the run after being heavily pounded by the joint security team.

The State Police Command appealed to the public to provide credible information on bandits and their accomplices to the security agents.

“The Command urges members of the public to cooperate with security agencies by giving them credible information on bandits and their collaborators, especially those supplying them with arms and ammunition, informants and other essential commodities.

“The Command assures members of the public that they remain resolute and committed in the ongoing fight against recalcitrant bandits until they are arrested and dealt with in accordance with the extant laws of the land,” Gambo stated in the statement.

Ivanka Trump raises $4.5m in a single day for her father’s campaign to beat Obama’s record