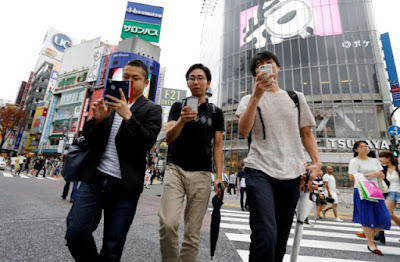 Many people use their phones while walking on the road and in Japan, it has been declared illegal according to the Daily Mail.

City councillors in the city of Yamato, in Kanagawa Prefecture, central Japan, are set to vote on a proposal to ban the use of phones while walking after research reportedly showed that too many people were looking at their phones while on the road.

This comes after scientists warned that texting and scrolling on touchscreens have sent pedestrian injuries soaring by 800 percent.

According to research, being engrossed in texting and social media has led to people walking into lampposts, stepping out into traffic, and tripping over.

The scientists behind the study, from the University of Calgary in Canada, said related injuries are likely to get worse.

They allegedly claim there has been an increase in injuries among people walking while distracted by their phones.

The team reviewed relevant studies on pedestrian distraction. One found 1,506 visits to emergency departments in the US in 2010 were caused by mobile phone use in public places.

The lead author of the research, Dr. Sarah Simmons and her colleagues said:

Given the ubiquity of smartphones, social media, apps, digital video, and streaming music, which has infiltrated most aspects of daily life, distracted walking and street crossing will be a road safety issue for the foreseeable future.

If the June vote is passed, Yamato will become the first city in Japan to ban walking while looking at a phone. The new law would then be defined as offending behaviour which is walking while gazing at the screen of a smartphone or other device.

If the new law is approved, it will come into effect on July 1.