Professional strippers hit back at critics who say their job is ‘degrading’ by showing off cash, expensive things they have 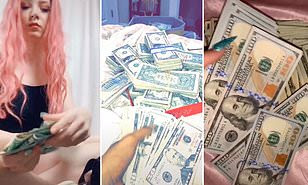 Professional strippers on TikTok are hitting back at critics who say their job is ‘degrading’ by showing off all the cash they earn and the expensive things it buys.

The trend was kicked off by TikTok user Lilithrising, who shared her video on January 23, months before the pandemic shut down many strip clubs across the US.

As she played audio of a woman calling stripping ‘degrading,’ she pulled wads of cash out of her bag, tossing twenties into a pile in front of her before throwing them in fistfuls above her head.

It’s unclear where the audio in the video comes from, but the woman speaking makes it clear she doesn’t approve of stripping.

‘Oh my god, you’re a stripper? Like, that’s so self-degrading,’ she says.

Meanwhile, Lilithrising appears on screen, sitting on the floor in shorts and a tank top. She reaches into a bag nearby and starts to pull out cash. 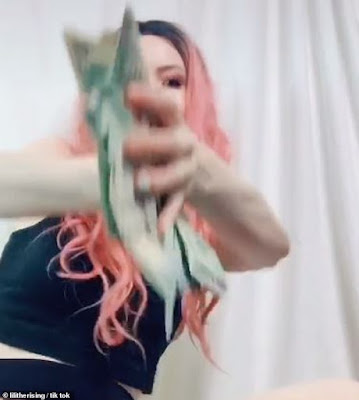 Lilthrising continues to pull out more and more cash, most of which appears to be up of $20 bills.

‘You should go back to school and get a degree,’ the lecture goes on. ‘You’re body’s not gonna get you everywhere forever.’

The woman on camera is still pulling out money, showing off hundreds, possibly thousands, of dollars.

‘You’re just an awful person and I don’t know how you do that to yourself,’ she concludes, as Lilthrising throws her cash up into the air.

Lilithrising’s video caught the attention of quite a few other strippers, who followed suit with their own clips.

Using the original audio, they responded to critics by showing off their own massive piles of cash, designer clothes, and luxury cars — sending a clear message that this is why they strip for a living.

Some have had wads of $100 bills, with other showing off the piles of cash they made in a single night.

Others posed with their Porsche and Mercedes-Benz cars, and one woman showed off her Valentine’s day haul, which included not only cash but flowers, chocolates, and gifts.

One woman captioned her video with a response to the audio lecture, writing: ‘If I got paid for every time someone said this to me… 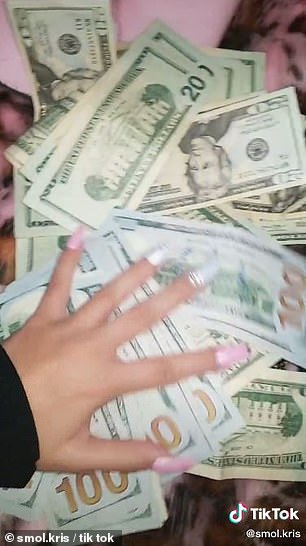