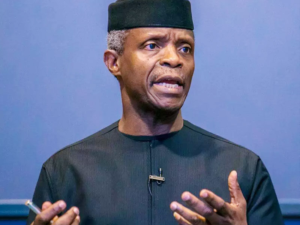 When the VP took the stage at the 2022 Chairman Forum, he surprised his audience by singing “Bad man looking good in Dior.”

The song titled ‘Dior’ was released by Ruger in 2021 and has been a hit song all over the country.

When his colleagues heard him singing, they were taken aback. Nonetheless, they praised him.

Watch the video below:

Date reportedly set for when Chelsea could return to action again, and it’s not long