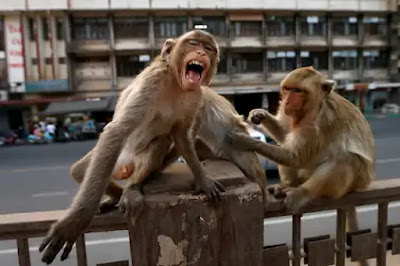 A group of monkeys ran away with coronavirus test samples after attacking a lab technician, it is reported.

The technician was carrying test samples of three suspected Covid-19 patients when the bizarre incident is believed to have happened in Meerut, Uttar Pradesh, India.

But the monkeys reportedly snatched the specimens and fled from the Meerut Medical College on Friday.

The samples had not yet been tested, Times Now reports.

Locals filmed what they say is one of the monkeys sat in a tree chewing one of the sample collection kits.

Fears are mounting about the virus spreading amid reports the monkeys are carrying the samples around nearby residential areas.

Amir Haque, Lucknow Bureau Chief, said in an interview with Times of India that during the attack, a monkey snatched one of the test samples.

He described the incident as “very, very dangerous”.

“While animals cannot be responsible for carrying this disease, if they are carrying these sample tests and they move away from the medical college to residential areas then definitely if there are contaminated kits there, then they (the monkeys) can spread the infection further.

“Therefore it’s a very serious alarm for health authorities as well as the local administration involved.”

He said ‘a troop of monkeys’ around the college have been reported previously for creating ‘nuisance’ but that this was ‘something new’.

Mr Haque said the medical college was looking into the matter and trying to trace the samples.

He said there is an alarm being sounded in and around the college.

Meanwhile, the three patients have had to be tested again.