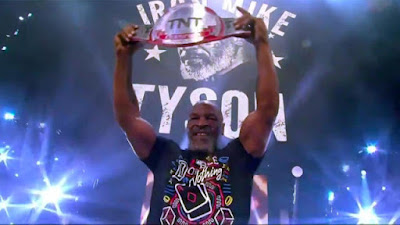 Mike Tyson made a huge entrance at the TNT wrestling championship – by ripping off his shirt on stage to stop WWE legend Jake ‘The Snake’ Roberts from interfering with the match.

The Baddest Man on the Planet was meant to be presenting the All Elite Wrestling (AEW) winners with their prize but instead got slap, back in the middle of the action.

Cody Rhodes and Lance Archer had gone head-to-head to become the first-ever TNT champion at AEW Double or Nothing on Saturday night.

And Iron Mike, 53, exploded onto the scene as he got involved with the action.

Rhodes and Archer had continued their hate-fuelled angst leading up to the match.

Archer was a ‘student’ of ultimate baddy Roberts – armed with a sack containing a live snake.

With Archer destroying all in his path, Tyson became an instant meme with his own entrance to step into wrestling folklore. 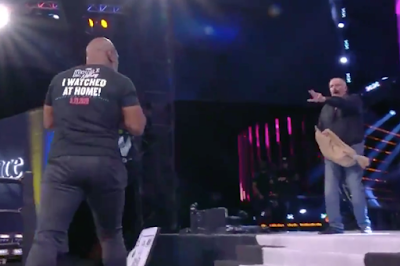 He clashed with Archer again and again – before Roberts stepped in and got involved in the clash.

And once the Baddest Man on the Planet showed he meant business by ripping his shirt off, Roberts quickly backed down.

Fans might have wanted the former undisputed heavyweight champion to knock Roberts and Archer both out.

Instead he lifted Rhodes’ hand to signal the winner and then handed him his title.

Tyson, set for a return to the boxing ring possibly against old foe Evander Holyfield, had earlier sat ringside and was totally gripped by the action before him.