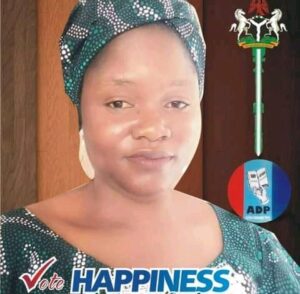 Data Happiness Biplang Gideon is contesting for the seat of the member representing Pankshin south in the Plateau state House of assembly which became vacant following the demise of late honourable Henry Longs who until his demise was occupying the seat.

The bye-election is scheduled to take place on 26th February, 2022. And Mrs Happiness who has been a vital part of the Action Democratic party for many years, who served as woman leader of pankshin Local government area is the party’s flag bearer for the said election. 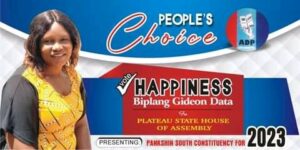 Happiness is the 5th child out of 8 siblings. She is married to Mr Kenneth Sunday Naankang Watlit of Bongmut village of Buzuk, mother of five children, a politician, business woman and a gospel artist with five albums to her credit.
She was born and raised in Poekongship village of Chip district.

Data Happiness Biplang Gideon a true woman with integrity, full of humility, friendly and so compassionate is sure the best candidate to fill in the vacant position of the member representing Pankshin south in the plateau state house of assembly.