A young man has taken to Twitter to recount how he lost his relationship over refusal to do internet fraud aka yahoo yahoo as advised by his girlfriend.

According to the Twitter user @ikhuoria__, on his birthday, his girlfriend offered him a gift box containing a laptop which special instructions to quit a job for internet fraud.

The birthday boy however turned down the offer which is then followed by losing his relationship and at the same time the birthday gift.

“I remembered when i was dating this girl she bought me a gift on my birthday, when I opened it i saw a laptop and a moderm. I was surprised when I saw them. I had to ask her who are they for? She told me the reasons she bought them for me is becos she’s not happy with my salary and also I should start doing Yahoo (scam) I told her I can’t do it she said if I didn’t do it she will end the relationship. To my surprise, she packed all her things out of my house including the birthday present she bought for me,” he wrote. 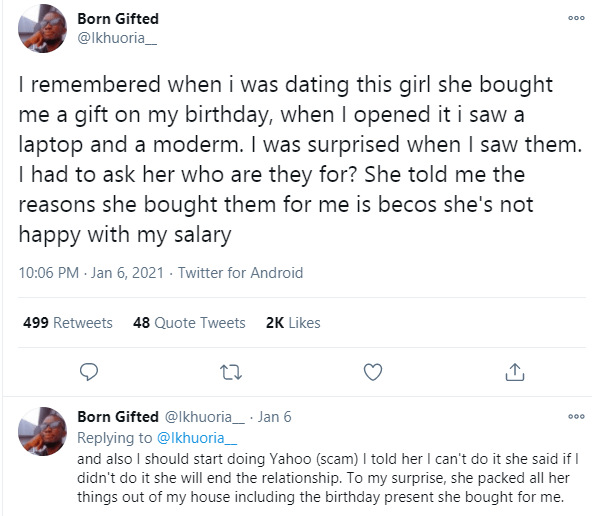 killing of Christians: My response to Trump – Buhari