If DNA confirms the baby is not yours, it doesn’t change the fact that you must take responsibility of the child – Controversial lady, Vivian tells men - JEXCLUSIVEBLOG
Facebook Twitter LinkedIn Pinterest Messenger Messenger WhatsApp Telegram Share via Email 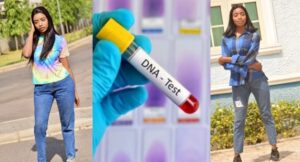 A controversial Nigerian lady identified as Queen Vivian, has said that men need to understand that they have the responsibility to cater for a child even if the child is not his.

According to her, if a father conducts a DNA test for his child and discovers that he is not the biological father, that it does not change the fact he must take care of the baby

She noted that when a married man impregnates another woman, his wife forgives him, so the same gesture should be reciprocated for the woman.

Men if DNA confirms the baby is not yours, it doesn’t change the fact that You must take responsibility of the baby…

Women go through a lot in Marriages and women deserve better.

When a married man impregnate a woman, his wife will be told to forgive and endure . Every gender should be treated fairly.”

HUSHPUPPI IS NOT RELEASED, WAS TRANSFERRED TO ANOTHER PRISON INSTEAD – LAWYER