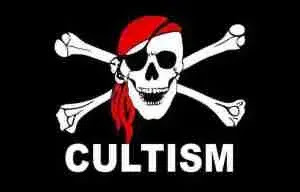 A suspected member of Eiye confraternity, Muiz Lawal, 21, popularly called Onishawa, who was arrested following a cult clash in the Denton area of Lagos, denied killing anyone since he joined the group.

He stated that he joined cultism in 2018, to spite his grandfather and “bring shame to members of my family”, whom he accused of neglecting him.

According to him: “I lost my father when I was younger. My mother abandoned me for another man when I was three years old. I was left with my grandfather who never believed I would amount to anything good.

“I was rusticated from United High School Ayengburen, for being the King of Boys. It was not a cult group. But we were always engaged in inter-school fights.

“My family abandoned me because they said I was its black sheep. My grandfather is the chairman of slaughters at Odo-Eran, Denton.

“I had to join cultism to spite him and bring shame to him and other members of my family for abandoning me.

“I approached my grandfather some time ago to sponsor me abroad but he refused. I am a Disc Jockey and also the slaughter of cows.

“My identity in the confraternity is Sparrow 21 colours. My position is the DOVE. We have three types of doves: Intelligence, Armoury and Rugged.

“I am the Intelligence Dove and my duty is specifically on security. I am to inform the Capon about any untoward movements during an outing.

“Rugged Dove handles the weapons and is always in the bush, while the armoury Dove personally guards the Capon. I was arrested by Oyabo boys at Ikorodu garage