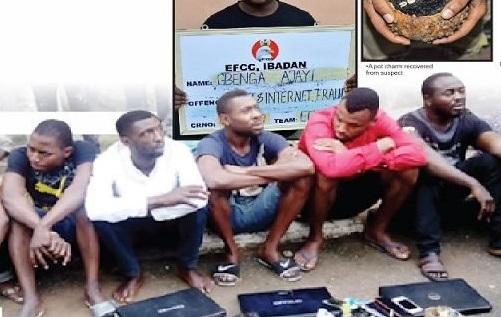 They are young men who live their lives on the fast lane. They love the good things of life but lack the legitimate means to acquire them. Rather than seek legitimate means of fulfilling their fantasies, they took to cybercrimes, defrauding unsuspecting individuals and organisations until they recently came under the radar of the Economic and Financial Crimes Commission (EFCC).

The onslaught by operatives of the anti-corruption agency has since dislodged these young persons from their bases in the urban centres to various rural communities, particularly in the Southwest to escape EFCC’s searchlight.

True to its slogan, ‘you can run but you can’t hide’, however, the anti-graft agency is unrelenting in smoking out the scammers popularly called yahoo boys from their various hideouts. One such was a raid carried out in the early hours of June 16 at Itele, a sleepy community near Ota in Ogun State, in June this year. Residents of the community were roused recently by the unusual presence of EFCC operatives who cordoned off several roads as they searched vehicles that moved in and out of the community in an operation that was to shock unsuspecting residents.

A few minutes later, their targets were picked up in their posh vehicles while one of the scammers escaped in his car.

Posh cars of different brands allegedly acquired with the proceeds of their fraudulent activities were recovered from the suspects.

Investigation conducted by The Nation revealed that no fewer than 32 internet fraudsters who had relocated from Lagos to Ogbomosho in Oyo State were smoked out of their hideouts on Tuesday, August 11 by personnel of Ibadan Zonal Office of the EFCC,

In October last year, anti-graft personnel recovered the sum of N223 million from the bank account of an alleged internet fraud kingpin, Ajayi Gbenga Festus, during a raid on his hideout in Ekiti State.

The suspect was allegedly the head of a syndicate dislodged from the city, who relocated to a remote community in Ado-Ekiti to beat the dragnet of the EFCC.

According to the spokesman of the Ibadan Zonal Head of the anti-graft agency, Mr Friday Ebelo, during a media briefing at Iyaganku, Ibadan zonal office, Festus was working in concert with other cyber criminals overseas.

He described Festus’ cartel as ”highly sophisticated web of a conspiracy designed to illegally access the accounts of individuals and organisations to defraud them of their money.”

He added: “Illicit transactions made through Festus’ Nigerian bank accounts amounted to N223 million. The suspect served as a conduit pipe through which proceeds of crime reached members of the syndicate.”

Ebelo added that Festus had pocketed up to N75 million within eight months from the illicit transactions.

Like others, 26 yahoo boys were smoked out of his Modzak Hotel in Abule Egba, a suburb of Lagos on December 4, 2019.

The raid was carried out by EFCC personnel attached to its Ibadan zonal office on a hotel believed to be a hideout for internet fraudsters.

Balogun was said to have recruited and harboured in his Modzak Hotel (in Abule Egba) yahoo boys to carry out scams on the internet.

The suspected kingpin and 26 other young men whose age ranged between 18 and 35, we’re arrested and taken to the Commission’s Ibadan zonal office for further interrogation.

Horror! Thai woman is bitten by python while using the toilet