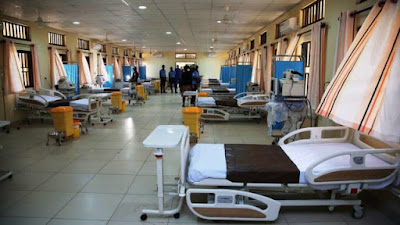 A mild drama ensued at the Federal Medical Centre (FMC), Asaba, Delta State as a seven-man gang stormed the facility, beating security agents and forcibly moved one Nwachukwu Michael Mordi, who tested positive to COVID-19 on May 23, 2020.

The forced movement of Mordi, a 53-year Chief Nursing Officer and employee of the Central Hospital, Agbor, was admitted into the Treatment Centre at FMC, created some apprehension in Asaba and its environs.

Consequently, the state Ministry of Health expressed displeasure at Mordi’s resistance, even after testing positive for coronavirus on May 23 and was admitted into the FMC Treatment Centre, Asaba on May 24, 2020.

It warned that the abductors constituted grave danger to their own health and that of persons and the communities they would come in contact with.

In a statement issued by the Public Relations Officer (PRO) of the FMC, Ojebo Donald, management expressed concern that Mordi’s admission at FMC Isolation Centre, had witnessed aggression.

He disclosed that he (Mordi) had continuously threatened caregivers and also rejected medications, alerting members of the public about the public health danger of associating with the patient and those who have had contact with him.

A source at the hospital told The Guardian that the men who came in two cars, who claimed to be Mordi’s relatives, stormed the facility about 6pm against the consent of personnel on duty and took him away.

Meanwhile, Commissioner for Information, Charles Aniagwu said the setting up of Operation Delta Hawk would not stop the state from participating in the proposed Bayelsa, Rivers, Akwa-Ibom, Cross River, Edo and Delta (BRACED) Commission security outfit for South-South region.

Aniagwu added that the government would continue to assist security agencies operating in the state to ensure a safer state, as there would be effective intelligence sharing among all security agencies.

“We are committed to the setting up of the BRACED Commission’s regional security outfit and we are also empowering and equipping the security agencies, even when they are federal agencies because they are protecting our people,”