Could pigs be the next source of pandemic? 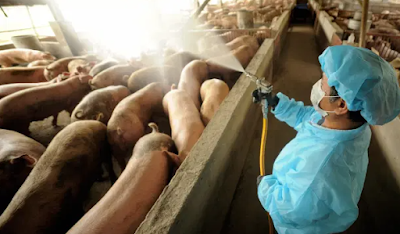 The World Health Organisation has said the world cannot let its guard down after a study in China found that a new strain of swine flu had the potential to trigger a new pandemic.

The paper, published yesterday by the National Academy of Sciences, said the virus was already a growing problem in pig farms and had “all the hallmarks” of being adapted to infect humans.

The findings come amid the ongoing coronavirus pandemic and just ten years after a swine flu pandemic estimated to have killed up to 284,000 people.

The authors of the study said the ability of the new virus – dubbed G4 EA H1N1 – to adapt would raise “concerns for the possible generation of pandemic viruses”.

Asked about the paper at a briefing in Geneva today, WHO spokesman Christian Lindmeier said: “We will read carefully the paper to understand what is new.

“It also highlights we cannot let our guard down on influenza and need to be vigilant and continue surveillance even in the coronavirus pandemic.”

The research laid out in the paper was conducted between 2011 and 2018, when scientists took 30,000 nasal swabs from pigs in abattoirs across ten Chinese provinces and one veterinary hospital.

From the swabs, they identified 179 different swine flu viruses, one of which was G4 EA H1N1, later found to be highly infectious.

Part of the reason it is such a concern is that the immunity humans build up to regular seasonal flu does not appear to provide any immunity from G4 EA H1N1.

A total of 10.4 percent of abattoir workers were later found to have the antibodies gained following exposure to the new virus – as were 4.4 percent of the general population.

The finding means the virus can already pass to humans from animals, but it is not yet known whether it can be passed between humans.

The Spanish flu that killed tens of millions during the 1918 pandemic is believed to have been transmitted from pigs to humans in America and then spread to a nearby army camp.

Troops at the camp later shipped out to France to fight in World War One, and the disease began to spread throughout Europe.

Echoing the WHO, Prof Kin-Chow Chang of the University of Nottingham told the BBC: “Right now we are distracted with coronavirus and rightly so.

“But we must not lose sight of potentially dangerous new viruses.”