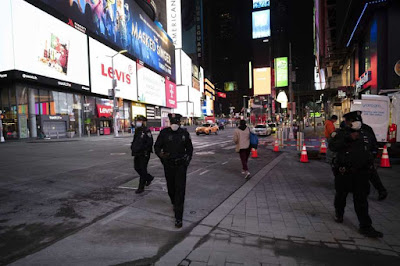 NYPD officers have been accused of discrimination, after heavily enforcing social distancing rules in parks in the New York’s poorer Bronx area, while crowds gathered unchallenged in the wealthier Manhattan borough.

Officers were seen enforcing coronavirus restrictions during this weekend’s warmer weather but appeared to take a less aggressive approach in Manhattan.

Blogger Ed García Conde couldn’t help notice the difference after posting an image of cops in a van patrolling St. Mary’s Park in the South Bronx on Saturday, making sure people were social distancing as required.

He pointed out that the enforcement worked in keeping the normally crowded park more on the empty side, despite the warm weather.

But Conde contrasted the scene with the crowds seen in Christopher St. pier in Manhattan’s West Village the same day.

Photos from the pier, taken by Conde, showed it was packed with sunbathers close to each other. 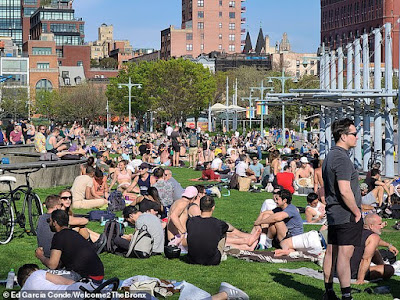 ‘I guess in the police force’s eyes, people of color need to be policed,’ Conde said in an interview with Yahoo News. ‘We need to be told what to do.’

The blogger’s observations reveal the stark contrast in enforcement between New Yorkers in relatively affluent, predominantly white communities in the city and neighborhoods in the Bronx that are predominantly Latino and black.

‘To me it was very disturbing,’ Conde said.

‘It’s glaring. Just the audacity, the privilege that these people were exhibiting on the pier when almost 20,000 people have died in New York City from this alone. We are the epicenter. But then it doesn’t surprise me because, you know, between Manhattan and the Bronx, we know this is a tale of two cities.’