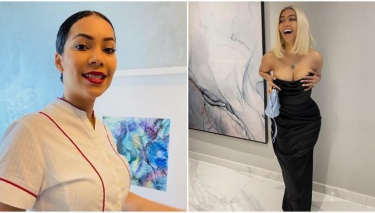 Why I Agreed to be a Wildcard – Ex-housemate Bbnaija Maria

Big Brother Naija Shine Ya Eye ex-housemate, Maria has opened up on the reason why she accepted to be a wildcard.

Recall that Pere and Maria were the two wildcards in this House.

Speaking in a Facebook live interview with Punch Online on Wednesday, Maria said she took on the role because she loved challenges.

According to her, she didn’t know she was going to be a Wildcard till the day that the show began.

Maria said, “It happened on the actual morning when the girls were going into the house by 2am. We didn’t know that the guys had gone in on a Saturday.

“In the early hours of Sunday, I had an interview with the creative directors and they asked if I wanted to do this. It was 50-50. They told me it could help me and it could also damage me depending on how it pans out.

“I love adventures. I love challenges so I didn’t really think of a negative side like, ‘what if I don’t deliver this properly and I get evicted after a week?’ That will deprive me of the essence and purpose of me going on the show.”

After many considerations, she decided to take on the persona. However, she pointed out that she didn’t know there was another Wildcard till Big Brother announced it when the show began.

Due to her perfect disguise, the housemates were unable to detect that she was the Wildcard until she and Pere were finally exposed.