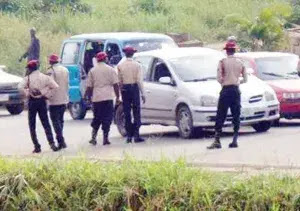 The FRSC Unit Commander in Egbeda, Assistant Corps Commander, Akeem Kareem, disclosed this while showing the goats and the vehicle to journalists on Tuesday in Ibadan.

Kareem said that the Sienna car loaded with the goats was abandoned on the road in front of FRSC office in Egbeda around 4.00 am when it had a burst tyre, and the driver of the car ran away.

The unit commander said that the FRSC officials met the car engine still running when they arrived at the scene and the goats inside the car were tied in the mouth with tape.

He said the vehicle was eventually removed from the road to prevent obstruction and road crashes.

Kareem said the FRSC Sector Commander in the state, Mrs Uche Chukwurah, had instructed him to hand over the goats and the vehicle to the police for further investigation since statutorily, FRSC could not investigate the matter.

“And, because of the insecurity in the country, anything we see on the road, we pick interest and make sure it is corrected before it gets out of control,’’ he said.

Kareem urged the public to always alert FRSC whenever they noticed any obstruction on the road in order to avoid avoidable accidents.