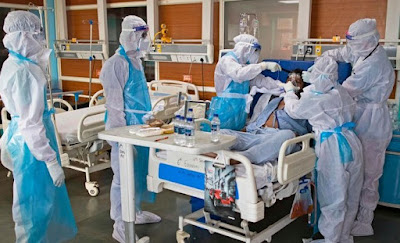 A 14-year-old girl has been r*ped by a coronavirus patient as his friend stood guard at the largest quarantine centre in India, police say.

The alleged victim and both men had tested positive for the virus and were staying at the 10,000-bed facility in Delhi when the s.e.x attack is claimed to have taken place.
Police said all three had mild Covid-19 symptoms when the alleged attack in a bathroom with the 19-year-old rape suspect as his pal filmed the incident on July 15.
It is believed the girl had been at the quarantine centre for around a week, India Express reports.
The rape was reported to police after the girl told a relative at the centre she had been attacked.
Senior police official Parvinder Singh told the publication: “The accused have been arrested and sent to judicial custody but will remain in institutional care until they recover from the infection.”
Parvinder also said that the girl was transferred to another hospital while the two men were taken to a different location where they remain in custody.
Police are investigating the r*pe claim.
The latest data suggests that India is the third worst coronavirus-hit country in the world.