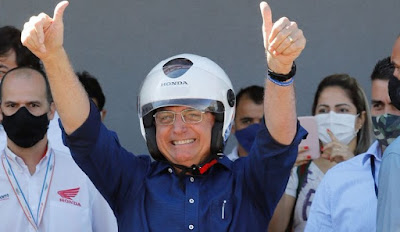 Brazilian president Jair Bolsonaro was spotted greeting supporters without a mask after confirming he tested negative for coronavirus within days of testing positive for a third time.

The 65-year-old leader, who has previously dismissed the virus, will resume his travel schedule after isolating for weeks inside Alvorada Palace – an experience he has described as “just horrible”.

He said on July 7 he had been diagnosed with the disease – which has killed more than 87,000 Brazilians – before confirming he was Covid-free on Saturday.

It comes just three days after he tested positive on Wednesday.

Mr Bolsonaro posted a photo of himself with a box of the anti-malaria drug hydroxychloroquine, although this has not been proven to be an effective treatment for the virus.

The president – who has been a leading skeptic in relation to the disease – often mingled with crowds prior to his diagnosis.

He had spent many weekends since the beginning of the pandemic in close proximity to supporters, sometimes without wearing a mask.
On Thursday, he was photographed without a mask while talking to some sweepers in the garden of the presidential residence.

Shortly after announcing the negative result, the president Mr Bolsonaro greeted supporters outside a bike shop, after going for a spin around Brasilia.