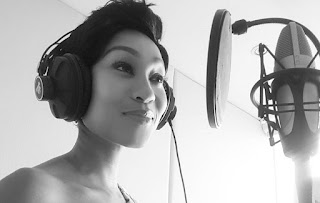 If you use MTN, we are sure that you are familiar with the voice that tells you that the number you are calling is not reachable; you don’t have enough airtime and other information as regards your account.

Many of us do not like the voice because, many times, it doesn’t tell us what we want to hear.

We must have even thought the voice is that of a machine but alas, it’s the voice of a beautiful woman and we have found her!

Kgomotso Christopher, a South African actress, is the woman behind the famous MTN customer care voice.

Right now, I have mixed emotions lmao.. I love you but I do not like this woman telling me about insufficient funds…,” a lady commented.

Kgomotso revealed she’s been doing the job for eight years and every time she tells people she’s the one behind the voice, they don’t believe her.