Magu opens up on alleged N4b, N28m to Osinbajo, Falana 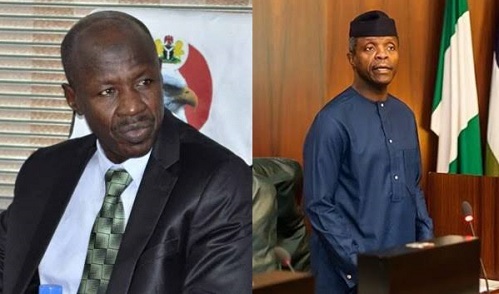 Ibrahim Magu, the suspended acting chairman, Economic and Financial Crimes Commission (EFCC), has opened up on the allegations that he gave N4 billion to Vice President Yemi Osinbajo.

The suspended EFCC boss, who was freed from detention on Wednesday, equally denied giving the sum of N28 million to Femi Falana SAN, a human rights lawyer.

Magu spoke in a petition signed by his lawyer, Wahab Kunle Shittu and addressed to the Chairman of the Presidential Investigations Panel, Justice Isa Ayo Salami.

“This allegation is complete falsehood designed to tarnish the hard-earned reputation of the Vice President.

“This allegation is a complete fabrication. Our client never gave N28 million or any amount to Mr. Femi Falana SAN as maliciously reported. Our client also denies any link with a Kaduna-based Bureau De Change Operator as alleged