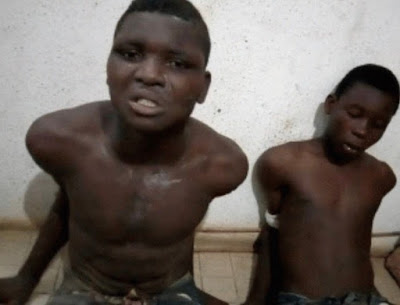 One of the two suspected members of a six-man robbery gang has said he joined the gang because he always saw them sharing money after each operation.

They had been parading as members of One Million Boys gang in Lagos, but were arrested by policemen attached to Ejigbo Division of the Lagos State Police Command.

The suspects had earlier written to residents, informing them of their visit and also threatened to cut off victims’ wrists if they did not get what they wanted.

However, luck ran against the duo of Sunday Oladepo, 21, and Adeola Adekoya, 18, as they were apprehended along Daleko/Ejigbo Road, Monday night, by policemen who got wind of the gang’s invasion.

Other members of the gang escaped.

At the time of arrest, the suspects were said to have rubbed black substance on their bodies to enable easy access into victims’ apartments through burglary proofs, and powder on their faces for disguise.

During preliminary investigation, it was discovered that members of the gang, resided at Kazeem and Apeno communities in Ejigbo.

During interrogation, one of the suspects, Adeola, said when they heard the police siren blaring that night, members of his robbery gang took to their heels.

He said he was unfortunate to have run into the midst of residents, who were keeping watch of their environment and was subsequently handed over to the Police team.

Asked why he joined the gang, the 18-year-old suspect said: “I always see them counting and sharing money, whenever they returned from operation.

“I thought I could make money too and had to join them. Segun introduced me to the gang and he taught me how to use cutlass on victims. The powder we rubbed on our faces was for disguise so that no one will recognise us. But I was arrested at my first operation.”

The suspects, however, denied being members of the One Million Boys gang, saying they were just members of a street gang.

They gave identities of other members as Sherif, Papa, Peter and Segun. They were transferred to the State Criminal Investigation and Intelligence Department, SCIID, on Tuesday.